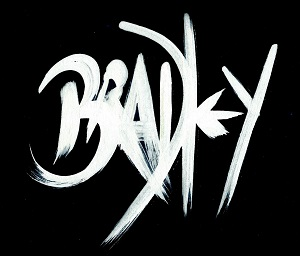 Terry Bradley was born in Belfast in 1965. His early life was spent growing up just off the notorious Shankill Road where his mother tried to keep him inside and away from the “Troubles” outside their front door. Bradley found a form of escapism reading Herge’s Adventures of Tin Tin and his work is still influenced by the black lines of the vivid drawings that illustrated the collection of books that he gradually acquired. He also spent hours in the attic room of his house listening to the then new pirate radio station Radio Luxembourg and imagined his travels and the exotic world beyond the realities of Belfast in the 1970’s. From an early age Bradley discovered that drawing calmed his nerves and that he could loose himself in the complexities of observing people and then recreating them on paper.

After a move out of the city in the late 70’s Bradley entered a large comprehensive secondary school and was instantly the outsider. Art and English were his best subjects and the rest of the time was spent staying out of trouble. Art was never mentioned as a possible career, and the most obvious next move was to one of the large factories on Belfast’s outskirts.

Bradley however knew that this was not for him and with absolutely no experience or history between them Terry and his two brothers set up and ran a factory of their own.
They manufactured and exported full lead mouth blown crystal and set out to compete with the leading crystal manufacturers. With orders coming thick and fast the young Bradley’s were doing extremely well until a combination of cash flow and high rent and wages meant the company closed it’s doors after four years. 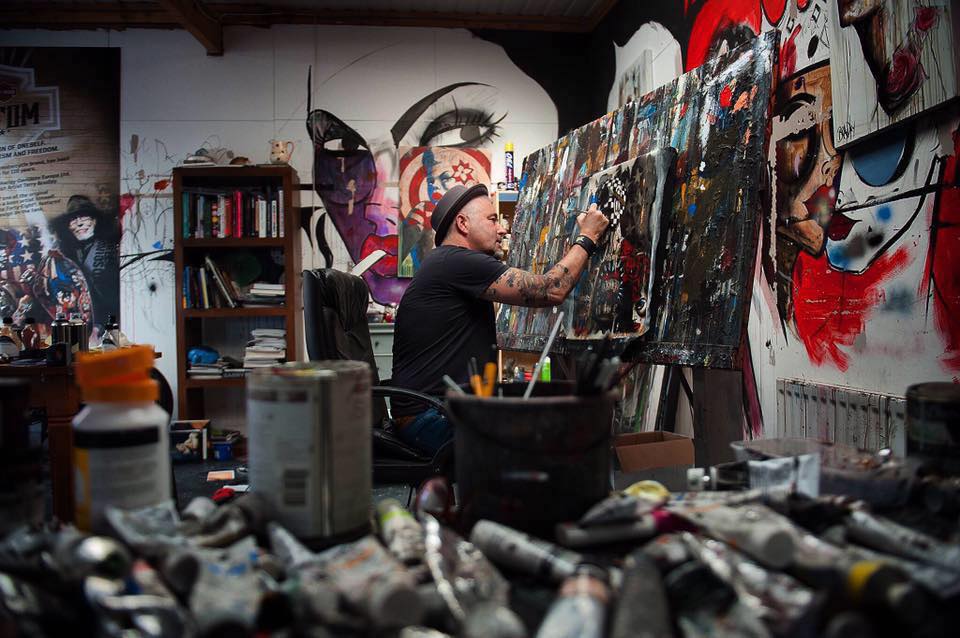 Terry then turned to his interest in art and fashion. Always having an eye for the aesthetic Terry opened his own clothes shop in the trendy university area of the city. Called “Retro” the shop was soon a leader in fashion for the clothes conscious of Belfast.

Terry’s was the first shop to stock Red or Dead shoes and he had a regular Saturday DJ playing in the tiny outlet. He sold hand painted jeans and one off shirts and jackets that he imported from all over the world.

A few years later and Terry needed a new direction, the shop was not fulfilling the creative side of Terry and he made the move to Dublin in 1989. Bradley stayed with what he knew however and initially started modelling clothes for friends to make ends meet. During this whole time however Terry was busy painting and drawing in his spare time. He still found it was how he relaxed and how he escaped from the pressures of his everyday life.

A chance conversation with John Reynolds, the owner of the famous PoD club in Dublin, lead to Bradley’s first solo art exhibition. The night was a huge success and Terry finally started to make some money from the one thing that had stayed with him all his life. 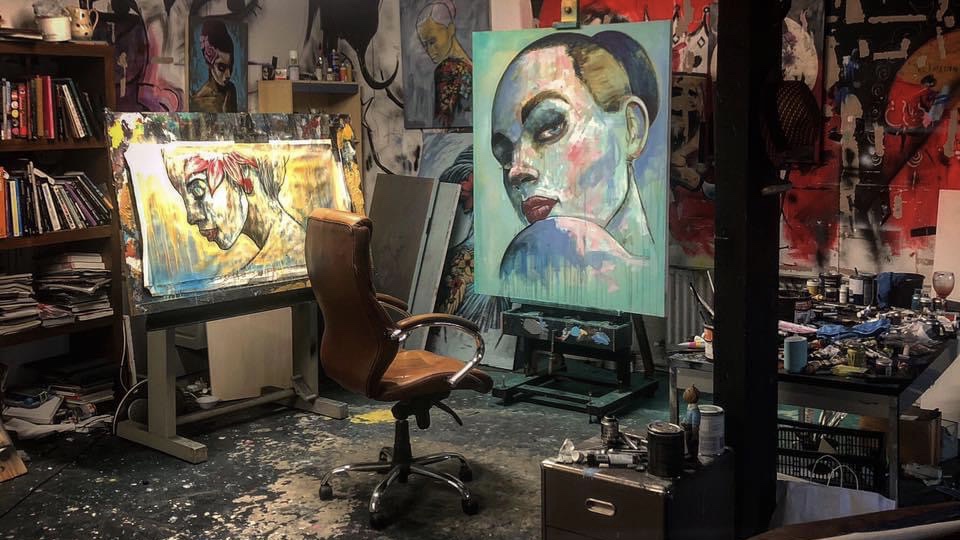 During the following years Terry has gradually become more comfortable with the title of “artist” and his work has gone from strength to strength and he now exhibits in Dublin, Belfast, London and Spain.

His natural aversion to the establishment has made it difficult for him to fit into a typical art gallery mould and he still likes to exhibit in the bars and clubs that he feels most at home in. He sells his work all around the world and his art has been used by Nokia for the cover of a limited edition mobile phone.

Bradley has now reached a place in his life that he is comfortable with. He is able to paint full time and explore the voyeuristic side of his nature that he first discovered as a child observing the dangerous world around him. His work mostly centers on strong women and ex models in Dublin and more recently Paris. His latest work is inspired by the era of the Belle Époque in France and the contrasts and similarities with the Burlesque dancers of New York. He has also recently started exploring the colourful characters from the Belfast dockland area known as Sailortown. At its heyday 100 years ago, the dock workers were famous around the world for their hard drinking and hard working attitude. Bradley finds that these paintings now balance the world of burlesque women that he paints. Bradley is married with three children and lives and works in Ireland.

Terry was extremely pleased to be asked by Titanic Belfast to create a wall mural with local artist 'Friz' at Hickson’s Point beside the iconic Titanic Visitors Centre in the Titanic Quarter of Belfast. The mural is based on his painting ‘Docker’s Rest’ and depicts the shipyard men of Belfast looking straight at the viewer and holding pints of Guinness. Hickson’s Point is the perfect venue for this art piece as it is the local bar and restaurant of the area and the wall art reflects the hard working, hard drinking men who lived and worked at the docks at the turn of the century.

Inside the bar are two large canvas prints which depict more of Terry’s dockers pieces entitled ‘Belfast, No Mean City’ and ‘Titanic, The Men Who Built Her’. Terry is proud that his work was chosen to adorn the wall of such an important and permanent reminder of Belfast’s important shipbuilding heritage. 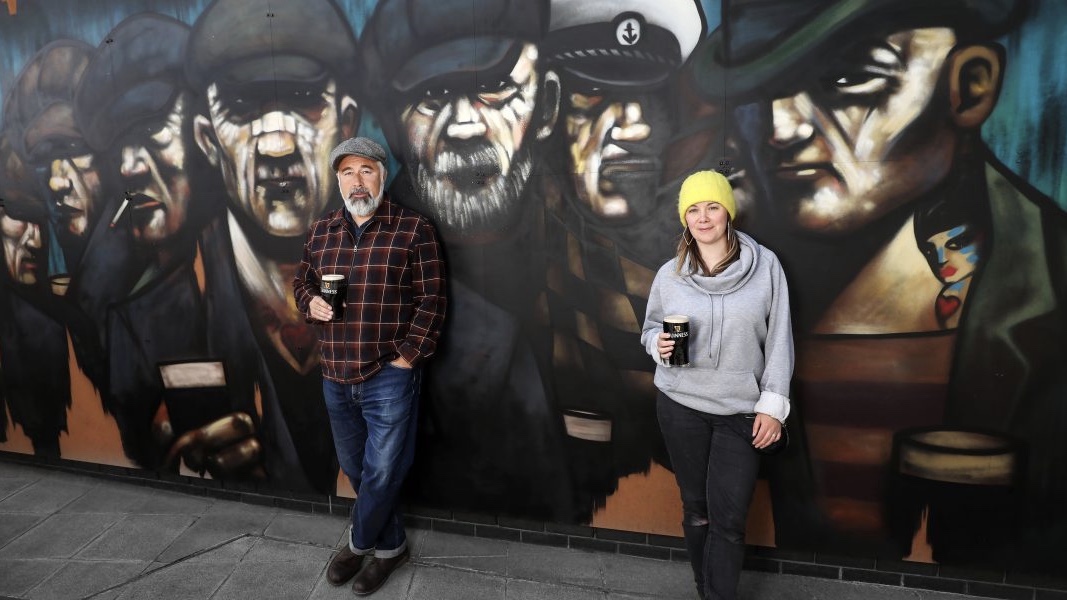 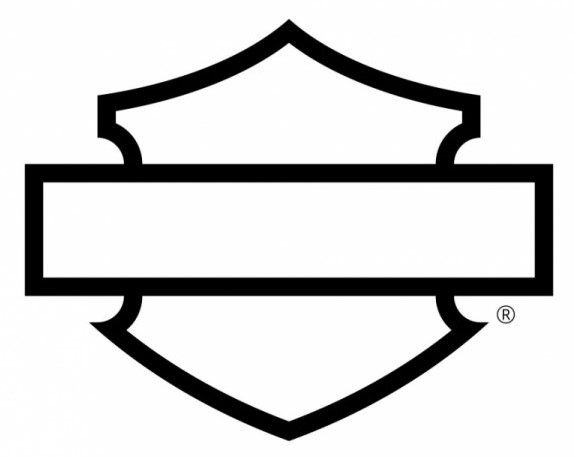 Terry was delighted to be asked by Harley Davidson to become a Brand Ambassador and one of only two European judges for the Art of Custom event which asked budding artists to design a Harley Davidson fuel tank. Terry's own fuel tank is now displayed in the Harley Davidson Hall of Fame at their headquarters in Milwaukee, U.S.A. 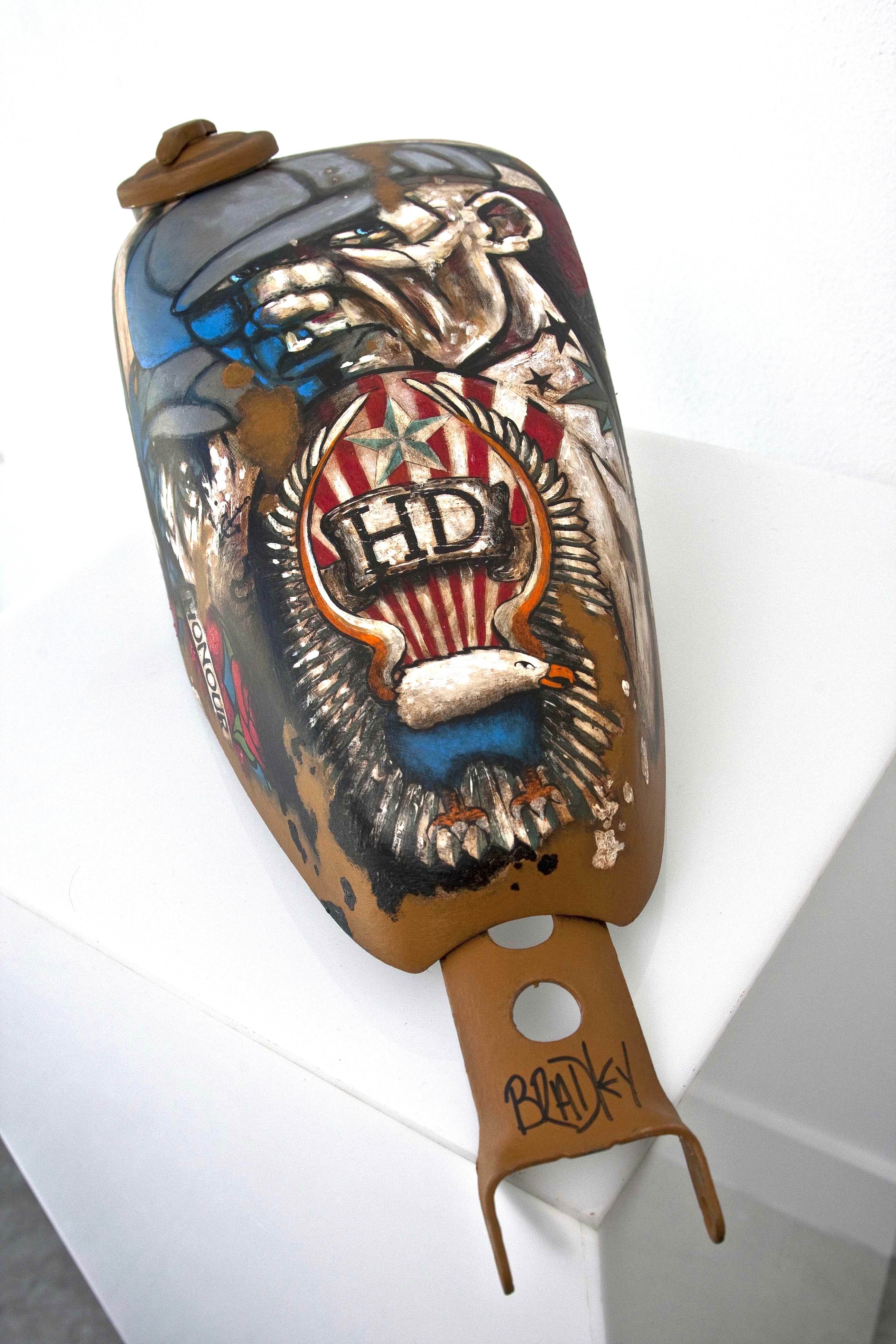 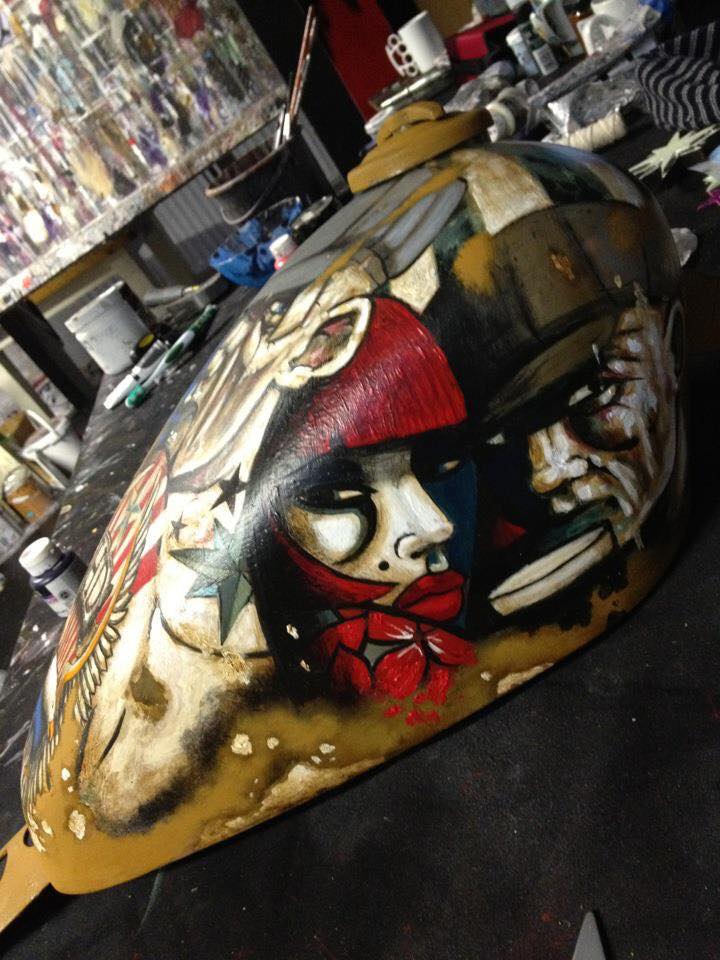 ABSOLUT Vodka are well known as a brand who love to work with artists from around the world to collaborate with. Terry was delighted  when ABSOLUT commissioned three large original art works and signed limited edition prints to represent the brand across Ireland. One of Terry's gorgeous paintings Shows the ABSOLUT angel which the company recreated on live models at various Bradley exhibitions. 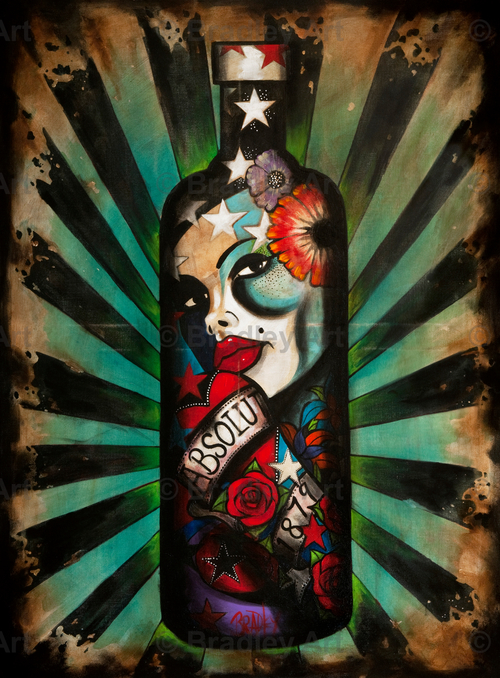 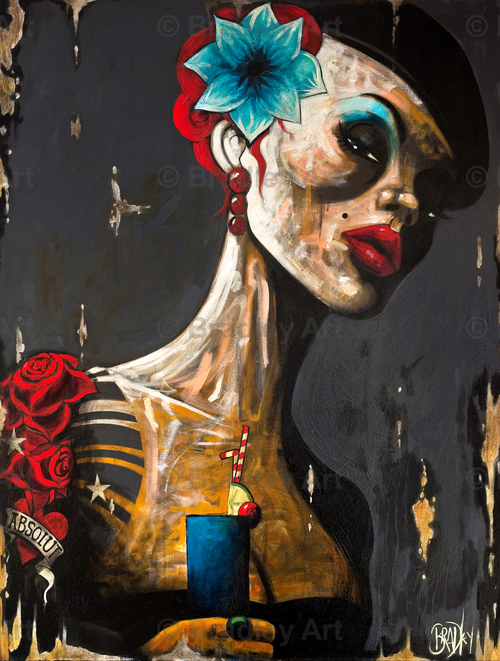 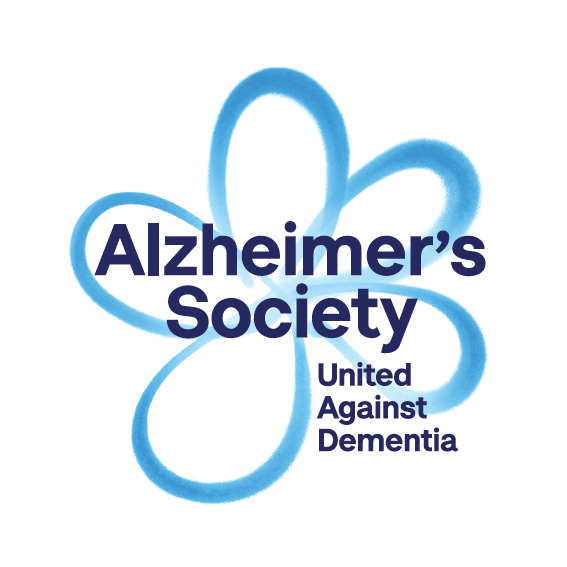 “Forget Me Not” was created by Terry Bradley in 2017 and was launched in association with the Alzheimer’s Society for Dementia Awareness Week.

The forget-me-not flower is a symbol used by the Alzheimer Society and has been beautifully worked into this original design by Terry. A percentage of each print sold will be made to the Alzheimer’s Society.

Click here to view and shop the 'Forget Me Not' artwork. 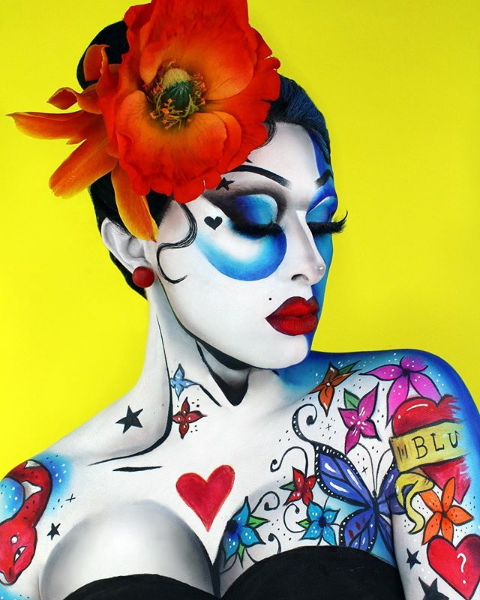 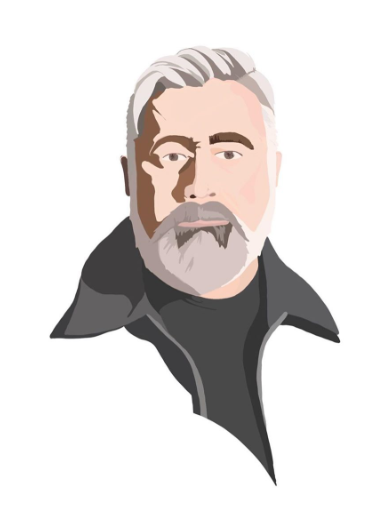 An artist on social media who is inspired by standing out and being different, this artist created this portrait of Terry to remember something he said in a interview that stuck with them and really meant something.

"It's funny, in my early school days, when the teacher would put out, like say, a cup and a jug I would always draw something different." - Terry Bradley 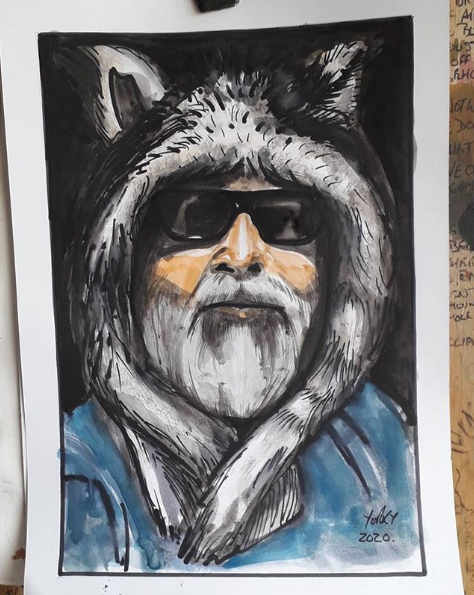 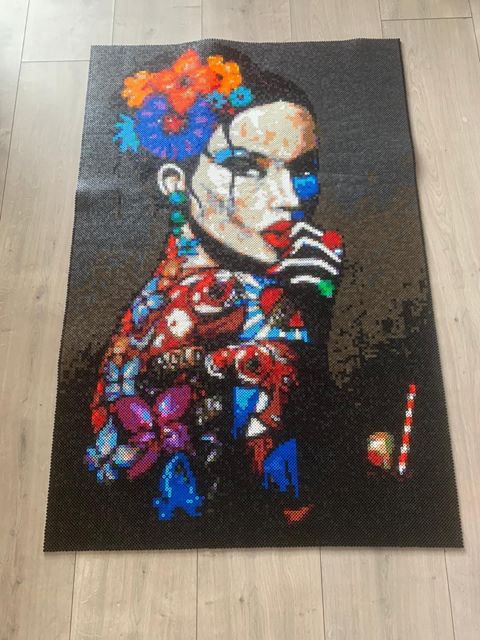 This user has used more than 27,ooo fuse beads to recreate 'Cocktail Hour' in this new medium. It looks great!

Submit your 'Inspired By' creations...

To submit a creation to be featured on our website, send it to the Terry Bradley Facebook page or Instagram page. Include #InspiredByBradley in your posts and messages so we can easily find your creations.